A build of Heal Zir’an that functions even without her traditional powerhouse epics. Uses no cards above rare. 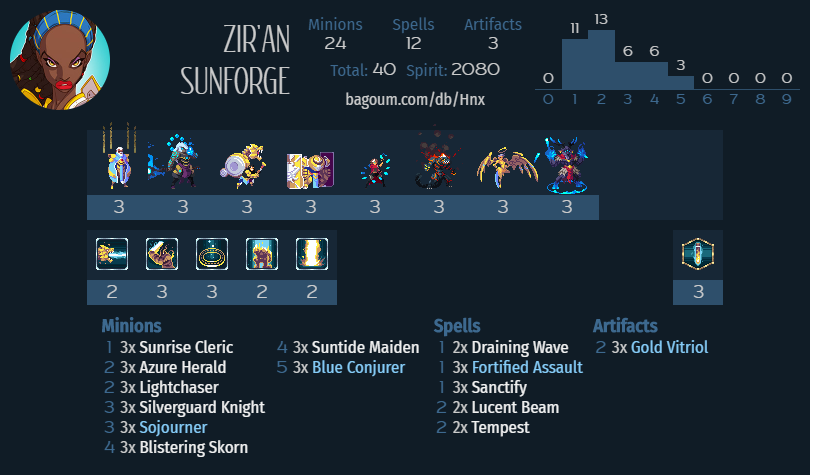 Zir’an is an interesting general – while one might naively expect that her healing BBS makes her suited for a grindy midrange deck, her best decks are all lower-to-the-ground and built around Lyonar’s in-faction heal synergy cards, trying to maximize their effects by going for as many heal triggers as possible. However, the best cards for this gameplan are epics – Sunforge Lancer and Sunriser give the best payoffs, and even more importantly, Trinity Oath allows you to have an aggressively low curve of healing effects without running out of resources. Is it possible to build Heal Zir’an without having access to these cards? Well, kind of. This build plays differently, and is not nearly as aggressive as are top-tier Zir’an lists. However, it has a similar gameplan of trying to maximize heal triggers, and is in some ways even better at doing so, with a focus on the repeatable healing of Hallowed Ground tiles.

It’s no secret that Hallowed Ground tiles are great for Zir’an, giving you a potential heal trigger every turn for no mana beyond the one low initial investment. Cleric is the card that sees play at high levels, since his tile is the easiest to make immediate use of and he’s a minion that can be healed himself. Sanctify is nice for pushing minions past certain critical health thresholds. Assault is actually quite a powerful removal spell in this deck, scaling naturally as the game progresses – early on it takes out small things, but later in the game you can easily do 5+ damage for just 1 mana.

These cards also offer some extra value in being able to overwrite your opponent’s special tiles. While you won’t be able to make much headway against a deck that’s dedicated to a certain tile type (e.g., Creep or Fault decks), many decks produce incidental special tiles coming from some commonly played card (Cassyva’s BBS, Sandswirl Reader in every Vetruvian deck, or Sunrise Cleric in Zir’an decks), and these you’ll usually be able to superimpose your own Hallowed Ground over.

One important point that has to be made, however: you need to use your Hallowed Ground tiles intelligently. There are many circumstances in which you’ll need to move away from a tile and forgo the heal for the turn so as to better protect yourself or get closer to the action. It comes down to carefully weighing and balancing the benefits of the extra heal (the one life itself, any triggers) versus the other actions you could potentially take.

Other effects that heal. Your BBS and Herald are your only ways of healing things on your turn proper, which is important to keep in mind when you need an immediate trigger. Maiden is a pretty good budget option, providing solid stats and extra incidental heals.

Lucent Beam is a little tricky to turn on since your end-of-turn heals don’t count, but is still a powerful effect. Since this deck is more midrangey, you’ll often find yourself using it as removal, but of course it’s still a big chunk of face damage if you manage to get the enemy general low enough on health. Lightchaser is a removal magnet, and quite easy to kill early in the game, but later on it’s not hard to grow it decently large the same turn it’s played, and it gets quite big if left unchecked. Vitriol is the real standout – its randomness can be frustrating, but this deck excels at getting a lot of heal triggers all in one turn, and that’s a lot of damage getting thrown around.

Strong removal spells that also damage your side, allowing for more healing.

These minions all have reasonably high healths (5+), which should hopefully allow you to get some heal triggers with them. Knight is a solid body, and the Provoke protects your more valuable minions. Sojourner and Conjurer provide good card draw, which is needed due to all your cheap spells. Conjurer in particular can refill your hand all in one go, and some of the Arcanysts it can get you are quite good for your gameplan, with the nut draw probably being Four Winds Magi. Skorn is excellent as a way to deal with swarm while also putting some minimal damage on all of your things – you can play it on top of a Hallowed Ground tile to get a heal right away.

Some other good budget cards that fit the gameplan and could be put in if you desire. Some easy substitutions are Lightchaser -> Mystic, Sojourner -> L’kian, Maiden -> Shieldmaster if you prefer minions with a greater immediate impact at the expense of theoretical higher potential.

Initially you just want to play your minions on curve, generate Hallowed Ground tiles, and use your removal to deal with anything too threatening. Once you’ve set up enough, you can go for a massive value turn: for example, playing Lightchaser or Vitriol into Skorn on a tile to net multiple heal triggers, or Conjurer into multiple cheap spells to refill your hand.

Trinity Oath is arguably Lyonar’s best card and should be the first upgrade. Beyond that, the most important upgrades are Sunforge Lancer and Sunriser. These are Zir’an’s signature epics, and are the real justification for playing a heal deck in the first place. Holy Immolation would fit well in a deck like this but actually isn’t played too much in top-tier Zir’an decks, which usually prefer the greater range and higher heal potential of Sunstrike.