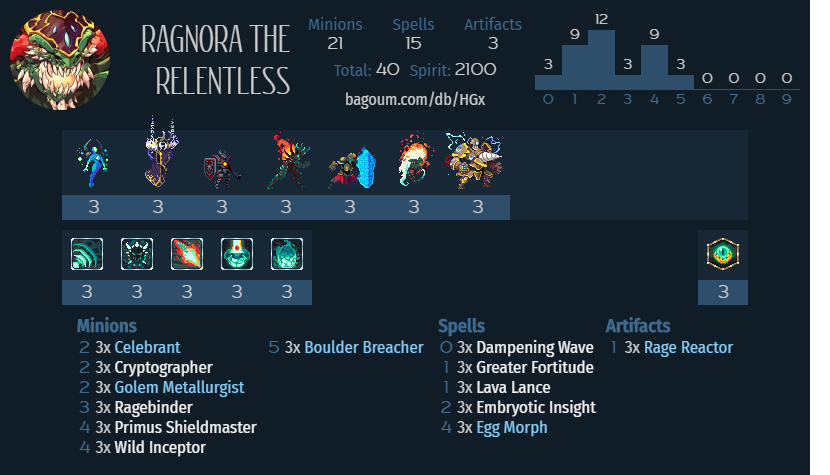 Rippers are very powerful units. Their Celerity is often used as the basis for out-of-hand OTKs, via hatching them, buffing them, and then pointing them at the enemy general. This deck focuses less on the aggro/combo aspect in favor of “dampening” effects, which allow your Rippers to take out opposing units while remaining alive. This allows you to accumulate many Rippers, at which point it’s not too difficult to maintain your board advantage and eventually win.

Building budget decks around Ragnora often feels like cheating, as he combines what is possibly the strongest standalone BBS with a ton of busted synergy cards all at low rarities. While this deck does run most of those cards itself, it “feels” better than the usual Ragnora builds because of how most of its wins come from the traditional route of accumulating value on board until it overwhelms your opponent, a “fair” method that is strong but allows for disruption.

Magmar has access to two of this effect, which helps with redundancy. With a Ripper up, Wave lets you do 6+ damage to a enemy unit without fear of reprisal, which is usually comfortably enough to kill it, and the Ripper left up is very threatening. Breacher is even better, often allowing for a 1-sided board wipe.

The main ways to abuse the dampening effects. You’ll end up with too many eggs for your opponent to deal with in one turn, which turn into multiple living Rippers, which allow you to maintain control while digging for your game-ending burst.

The basic Golem package, good on its own and necessary to support Breacher’s Bond.

A budget staple, helpful for keeping your eggs alive.

The Egg combo package and related synergy effects providing additional egg production, removal, and draw. I like Insight over Tectonic Spikes in this deck because of the slightly better synergy with Reactor, but it is possible to burn through your hand quickly with all the cheap cards, so this does mean you have to be a little more frugal with your card usage.

For the most part you’re just a low-to-the-ground tempo deck, but the Dampening effects are a surprise way to clear big frontline units that your opponent won’t be expecting. Once you’ve established a couple of active Rippers, use them to keep ahead while digging for your game-ending burst effects.

To Eggmar, which has basically the same gameplan of accumulating Rippers until the value overwhelms your opponent. The key cards are the epics Zoetic Charm and Bloodbound Mentor (together with the omnipresent Magmar staple Makantor Warbeast), but if you want to get fancier, some builds include legendaries like Progenitor and Extinction Event.

A related Celerity-centric budget build in Lyonar, using Dauntless Advance in place of Dampening Wave: decklist here. Even though Lyonar is thematically the “Celerity faction”, none of its units are as cheap or as sticky as Rippers, so this build is more reliant on the surprise factor in order to jank out wins.

Spamming that Ripper cheese. Uses no cards above rare.