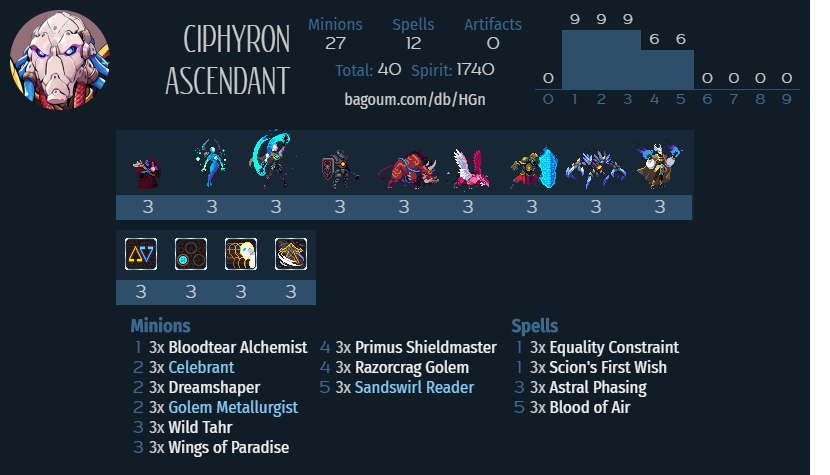 Equality Constraint is an interesting card. While not very strong on its own, if you build around it properly, it makes up for it with flexibility: by playing minions with unbalancedly high attacks, Equality can act as a conditional massive health buff on your things or as a relatively weak removal spell when aimed at enemy minions. Neither half is strong enough to play on its own, but combined the spell is not bad.

Equality was mostly covered already above. One more thing to note is that it acts as a transformation effect changing the base health, so the effect cannot be dispelled.

Phasing is one of my pet cards. It’s overcosted by a mana or so, but the effect is actually quite strong. Even decks/factions which run hard removal usually don’t have all that many slots for it, and Phasing is a way to recover from a soft removal like Demonic Lure that your opponents won’t be anticipating.

Tahr and Razorcrag can get massive toughness boosts from Equality. Tahr is just a solid card that you should play out normally and catch people by surprise with your buffs if it lives through a turn cycle. Razorcrag, on the other hand, is prone to just dying for no value if you play it out unprotected, but against factions which rely on damage-based removal primarily, you can play and Equality it all in one turn so as to establish a massive threat. They still may be able to deal with it, but at least it will usually recoup the card disadvantage in how many of your opponent’s resources it demands. Equality has much less of an effect on Wings, but she’s just a solid budget card that offers a backup plan with some of the same synergies built in.

The standard Vetruvian 2-drop Golem package. As mentioned above, a preemptive Equality is sometime necessary to protect one of your major threats (usually Razorcrag), but that can lead to card disadvantage if it’s dealt with anyways. Dreamshaper helps a lot with catching up afterwards.

The ping from Bloodtear is nice for finishing off things that Constraint didn’t quite kill on its own. The 5-cost spot removal is great in this deck, as it always is. Try to use Sandswirl before BoA when you can for greater value.

Good basic cards. First Wish is something to do with spare mana that has an immediate effect on the board and doesn’t cost you a card, and Shieldmaster has good stats for its cost and can protect your more valuable minions.

Run out your small Golems early, maybe a Shieldmaster on turn 2, and play a normal tempo game. Try to play your bigger threats as safely as possible and then use your utility spells to get value. If you can get in just one big hit with a Razorcrag or the like, Sandswirl and Blood of Air will often provide enough pressure to allow you to secure the victory.

Primus Fist, Repulsor Beast, and maybe even Kinematic Projection would also fit nicely into this shell, and could be substituted in for something if you prefer.

As for higher-rarity cards, Akari Headhunter is another minion with self-buffing attack and is better than he may look at first glance, although he does necessitate running a few more Opening Gambit minions. Beyond that, you could go with the more expensive in-faction Golems in Wind Striker and Sirocco, as well as Ciphryon staple Grapnel Paradigm. See here for DrPerry’s non-budget take, taking the Golem route.

A Cypheron deck that utilizes Equality Constraint for cheap removal and creature buffs.

Tired of getting your Razorcrag Golem killed by unworthy weaklings? Those days are over!