Published by mrmana3 on the forum.

Hey everyone! Have you ever wondered why the boss AIs are complete bots? Have you ever seen a boss go full potato on you, and question why in the name of Serpenti the boss should pose any sort of challenge to your superior human intellect? Well now, you too can be a potato!

Introducing Shinkage Zendo, here to finally level the playing field by making your general just as stupid as the boss’s general. The difference between you and the boss, however, is that Shinkage Zendo has idiot-proofed himself, making himself unable to move so as to resist the temptation of smacking anything he sees. This also makes it easier for him to play around his cousin: Grandmaster Zendo.

More idiot-proofing is done by making it literally impossible to damage him until all his minions are destroyed. It’s almost like a really strong force field that can potentially last forever, so that’s fun. :P

But worry not. Zendo is still a bot at the end of the day. He could make you smack a Hamon Bladeseeker, but instead place a wraithling closer to your general so you can smack it instead. He even maindecks Yun. FREAKING YUN!!! You don’t need control of your general to beat someone who uses Yun.

If your general doesn’t kill itself before Zendo dies, you’ll be given a Boss Crate, and prove once and for all that you aren’t quite as much of a bot…as a bot.

Here is a deck with which I had success against that boss on my first try. 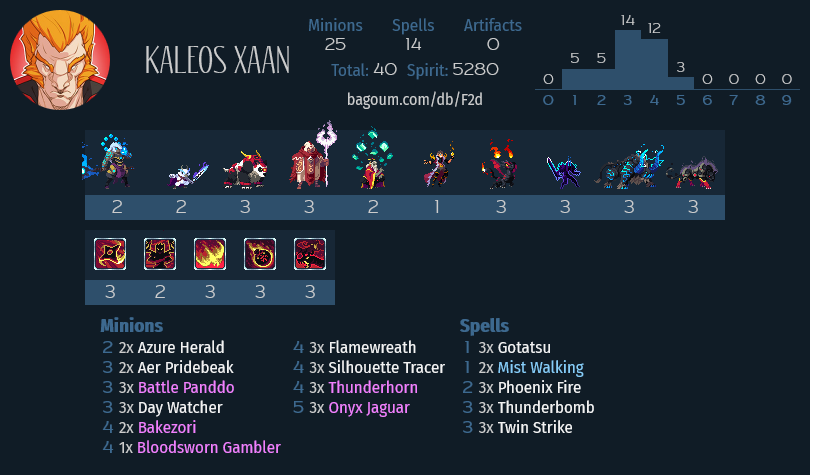 Our general is acting like a battle pet, so on their best way to just die. Luckily the AI is not abusing that to their greatest advantage. In addition to us being a battle pet Shinkage Zendo is immune against any damage as long as one of their minions lives.

So our goal is to survive, to control board and build up a board strong enough to kill Shinkage Zendo

For that goal we play a lot of healing, I decided to go with Azure Herald, Aer Pridebeak and Daywatcher. Maybe some more straight forward healing could be good but that would mean being worse in other areas.

Key cards are Silhouette Tracer and Mist Walking to being able to keep distance and get bodyblocked by our own minions to prevent suiciding into enemy minions or Zendo themselves.

With Shinkage’s BBS and low deck curve they can put a lot of minions on board which we need to clear to make them vulnerable. For that we added Gotatsu, Phoenix Fire, Twin Strike, Thunderbomb as spells. Battle Panddo, Thunderhorn and Flamewreath add a lot more AoE to that package.

Key card here is Onyx Jaguar. The AI doesn’t realize that card’s value so it doesn’t prioritize it which is good for us :) Its ability makes our board huge and more resilient which is especially great with Thunderhorn, Battle Panddo, Flamewreath because that makes it way easier to control board too. Kaleos BBS is good here because it increases Onyx’s value and allows us to play around awkward positioning. and keep stuff alive because Shinkage Zendo is not moving.